After completing the Dales Way we decided to spend a week in the Lakes and have a little bit of a rest but also build on the fitness we hoped to have built up over the last week and walk up some of the 3000 foot 'mountains' in the Lakes including England's highest Scafell Pike.

We booked a lovely cottage just between Penrith and Carlisle - Mickle Rigg, which was part of a converted farm development Monkhouse Hill Cottages. Even though there were a number of other cottages and families staying at the same time it felt very secluded and quiet. An ideal place to relax after a day in the hills and just sit on the large lawn with a glass of wine watching the sun set. Cottage had everything - even a Chris Bonnington Climbing video to give us inspiration.

The closest 3000 foot hill to the cottage was Skiddaw so we set about this one first. After some low level walking you start to ascend onto the ridge of Longside from where you can see the track sweeping around and up towards Skiddaw.

Spectacular views all around were dramatically supplemented by The Red Arrows Display Team flying in formation along the valley with Red White and Blue smoke trailing behind. Unfortunately it was so quick i didn't manage to take any pictures. Did they just do it for us or at least Liz, myself and the crowd of people who had suddenly appeared from nowhere! We had been joined by a sponsored challenge event and very tired people were struggling along on what we think was their third and last summit in 24 hours. Even though this was only a small event organised by the Electricity and Gas companies the impact of mini-bus parties blindly trudging up hills was clear to see, rocks spray painted to mark out the route litter and potential accidents especially as the going got steeper and footings started to give way. It became easy to appreciate the bad feeling that organised charity events such as the UK 3 peaks walk are starting to generate within local communities and rescue services.

Well they were coming down and we were going up  just in time for the clouds to drop as we reached the top. Couldn't see a thing!  A few minutes earlier the summit had been bathed in sunshine and now the cloud and  cold wind made it necessary to get out the jacket, hat and gloves. Half an hour later as we were heading back to the car the cloud cleared and glorious sunshine illuminated the top of the hill once again!

Not one of Lizzie's usual trips to Karen Millen but a walk up to one of the oldest roads in England, the Roman Road on top of High Street. It was such a hot day and we struggled along. The small lake Angle Tarn looked so appealing but we weren't tempted to join the people taking advantage of the cool water and diving in. The path up to High Street crosses the point where the coast to coast leaves the Lakes on its way East towards Robin Hoods Bay. We had already decided that this was going to be our 2006 adventure so it was interesting to pass people struggling under huge rucksacks including one guy who had, like us, just finished the Dales Way but unlike us continued and walked into the Lakes, by the time we met him he was on his final drops of water due to the heat and keen to get down to the Tarn to replenish. 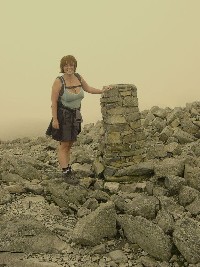 Our first attempt failed really before we had started dark clouds overhead soon turned into a heavy downpour and after sheltering in a farm barn until it had passed we continued only to be greeted by even heavier clouds heading down the valley towards us. Wisely we turned round and got back to the shelter of the farm barn just in time to avoid a soaking.

A few days later we set off again, this time the weather was better and thankfully not as hot as our previous walk up High Street so almost ideal conditions.

We were unsure as to which way up to Scafell Pike would be the best, but during a trip into Keswick we had gone into one of the walking shops, Rathbones and the staff there suggested going from Borrowdale rather than spending hours in the car to Wasdale Head, they even downloaded the route onto my GPS for me.

After a very pleasant walk gradually climbing the path comes to Sty Head Tarn and Great Gable then on upward to Scafell Pike, with a final 500 scramble up some scree to the summit. Just before we reached the scree we met a couple of guys, one in his 80's who with the aid of his trekking poles was managing to cope with the high ground - at least Liz had someone she could keep up with ( on the way up that is ! ) The scree slope looked quite intimidating and there were a number of options to get up onto the final ridge - as Liz quickly observed and had confirmation from one of the guys with us, I was taking them up the difficult way. At least the old guy made it.

There we were very briefly the highest people in England.

Following a little rest it was time to head back down, not being fully confident on big hills I was looking forward to having the company of the two other guys on the way down thinking that we could keep up with them. Of course I hadn't gambled on the turbo charged trekking poles, no sooner had he started to descend the old man was off, like roadrunner, a spot in the distance! Would have liked to have found out what he had in his flask at the top!

So there we were going back at our own pace when with about 2 miles to go before we would reach the car I heard a rumble and clatter of falling rocks behind me and turned round to see Liz on her backside with cuts and a twisted ankle. Thankfully the path back was not very steep and she managed to hobble back along the final few miles but the ankle stiffened up while we had an enforced wait as a farmer herded all of the sheep off the surrounding hillsides along the path back. The state of Lizzie's ankle meant that we had to cancel our planned visit to the climbing centre in Leeds and the swelling was quite severe by the time we had reached home and the ice packs.